OnTrac strives to build and maintain a reputation for business excellence in security. Whether you are seeking to establish your first security program or transitioning from another security provider, OnTrac stands ready to assist you. 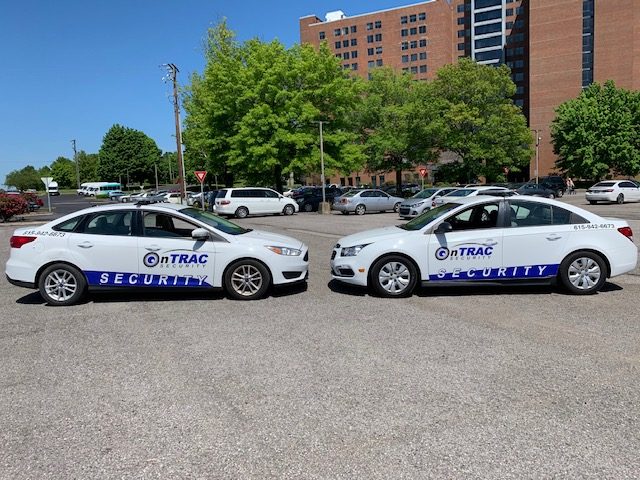 OnTrac also stands ready to assist your company with all of your security needs.
OnTrac is managed by a team of professionals with a wide range of experience and expertise. Our management team has over 100 years of combined experience in the areas of security.

Doug is a retired Metropolitan Nashville Police Sergeant. Having served over 31 years with the department. In 1986, Doug founded Enforcement Security, Inc. His company serviced over 50 clients throughout the state of Tennessee. His client base included universities, shopping malls, churches, schools, and medical facilities. Doug holds an Associate of Arts Degree from Southwestern Christian College and also studied Criminal Justice at Tennessee State University in Nashville. Doug has over 34 years of experience in the security industry and is a proven leader in the area of security.

Brenda joined OnTrac in 2014 as director of administrative services. Her responsibilities include overseeing administrative functions of business in accordance with regulatory standards and compliance. Brenda received an Associates of Arts degree from St. Phillips College in San Antonio, TX and has over 25 years of business office experience.

OnTrac Security is pleased to announce Joseph Bishop, Sr. as the newest member to our leadership team as Vice President of Operations. Bishop brings to OnTrac, 44-years of experience in law enforcement, executive leadership and special operations management. His core career principles have been guided by accountability, collaboration, and execution. Bishop is well-respected for cultivating partnerships and forging successful collaborations in the field of public safety and constituent service. He is a strong advocate of public and private safety initiatives to build trust through mutual and specific measures of service and accountability.

Bishop served 28 years with the Metro Nashville Police Department retiring as Deputy Chief of Patrol Operations. Highlights from his career include Chief of Police, Tulane University, New Orleans LA. He has also served as Assistant Chief of Police with the Vanderbilt University Police Department from 2014-2016, where he managed Support Services and Special Operations components of the police Department. Under Bishop’s leadership as Chief of Police in Columbia, Tennessee, he had 5 consecutive years of consistent crime reduction. He developed a campus safety plan for Morehouse School of Medicine as a Contracted consultant. A native of Boston, Massachusetts, Bishop’s career in law enforcement was sealed when he worked as a military police officer while serving in the U.S. Army.

Mr. Bishop is a member of the International Association of Chiefs of Police, International Association of Campus Law Enforcement Administrators, Police Executive Research Forum, National Organization of Black Law Enforcement Executives and Tennessee Association of Chiefs of Police. He is also an alumnus of Leadership Nashville. Bishop and his wife have one adult son, who is also a police officer, and Lucky, a rescued retriever. Bishop is also co-owner of Emerald Luxury Transportation LLC, one of Nashville’s premiere executive limousine companies.

OnTrac is also thrilled to introduce our Administrative Assistant Trina Glenn. Trina has been with OnTrac since January 2019.

Karz was hired with OnTrac in 2007 as a Part-Time Armed Security Officer. Karz shares 27 years of experience, knowledge and training received from opportunities in security/law enforcement agencies.

While attending Delta State University, Karz embraced the opportunity to work as an intern at Mississippi Department of Corrections marking the beginning of careers to come in the field of security and law enforcement.

Karz embraced a career in corrections with Corrections Corporations of America from 1995-2002. Starting as Correctional Officer then, promoting to Special Operation Response Team,

Karz rendered services to Meharry Medical College from 2004-2011, as the Captain of Campus Security. He assisted in creating a more safer campus life for students, faculty, staff and guests while planning for on and off campus events. He was accountable for 25-30 armed officers, including sergeants and lieutenants. Educating the Campus in crime prevention proved to be effective in lowering crime annually. During this endeavor, Karz was afforded the opportunity to attend and graduate from Cleveland State Community College P.O.S.T. (Peace Officer Service Training).

From December of 2011 through September of 2019, Karz rendered excellent services to TriStar Centennial Medical Center. He served in the position of Manager and Security Supervisor for startup of TriStar Spring Hill Emergency Room. He also assisted as a part time patient transporter.

Karz believes the keys to success is a willing mind in offering excellent customer service in professionalism and great work ethics. He believes in giving credit to GOD, the Creator of Heaven and Earth.